Facilitating Change delivered a number of stakeholder workshops. Many of the workshops were highly contentious and required sensitive facilitation of complex subject matter. Detailed reports of each of the workshop proceedings had to be produced.

As a result of this work Facilitating Change developed a consultation methodology, which has been distilled from our extensive experience of managing public consultations. It is called Facilitating Change Effective Engagement (FC E2 TM) Methodology© and is a systematic process for designing, delivering and reporting on engagement for major planning developments based on best practice guidelines. We are able to engage the local community from the early stages of the development lifecycle, ensuring that the engagement exceeds government standards and is of value to both the developer and the community. In this way we aim to build trusting and sustainable relationships throughout the life of a project.

We believe successful organisations will increasingly be those who are best able to work in partnership with local communities.

Facilitating Change has previously worked with Nirex to develop best practice for Stakeholder Engagement events. One of the process flow charts from this work is shown. This has enabled Nirex to design and deliver their engagement to a consistent standard.

As lead facilitator Chris Whitehead had overall responsibility for designing, delivering and reporting on the following stakeholder engagement events. 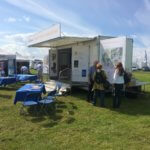